Hug Your Interviewer! (Or Better Yet, Please Don’t)

From the latest in neuroscience, here is some job search advice you probably haven’t heard: Be sure to give your interviewer a great big hug before you leave the room! It’s sure to leave a positive impression. Or, at least, it will be memorable.

Okay, let’s dial things back a bit before some hapless applicant actually acts on that little-known – and terrible – advice.

You can forego the hug, but recent neuroscience studies have raised some other very practical and helpful ideas you can use in your job search.

There’s no doubt the job search can be a tough time. If you’re not hearing “No” repeatedly, you may be hearing absolutely nothing, as hiring managers often ignore applications that don’t make the cut. You would not be alone if you ended up worried and depressed.

You may feel that you can’t do anything to get out of your negative state of mind. As it turns out, that’s simply not true. It’s just that everything researchers now know about why we worry and which strategies bring relief is quite counter-intuitive.

First, why do we get stuck in unhappy states of mind such as chronic worrying, shame, and guilt? What makes it so hard to let go of these feelings when we know they don’t help?

It turns out that the brain doesn’t see those negative feelings as being negative at all. Instead, those feelings stimulate reward centers within the brain. For example, shame and guilt activate neural pathways similar to those activated by feelings of pride.

And what about worry, a state of mind that seems to accomplish so little? Worrying is almost its own reward, because our brains will always choose to do something rather than nothing, writes neuroscientist Alex Korb in The Upward Spiral. And worrying is a particular something that can help calm the brain’s limbic system. Notably, it can decrease activity in a part of that system called the amygdala, which is especially active when we’re depressed or sad.

To our brains, the biochemistry in play makes worrying, shame, and guilt worthwhile. Emotions that seem unrewarding to our rational selves function as rewards on a deeply unconscious level.

If things are happening inside our heads almost as though we were on autopilot, perhaps there’s a way to intentionally influence the process. Perhaps we can fool our brains, or at least set them straight, with some simple tricks.

According to Korb, that’s well within our powers.

Turn your mind to gratitude

First, Korb recommends you take a little time to consider things for which you are thankful. That kind of thinking stimulates production of dopamine and serotonin, two neurotransmitters that are, not so coincidentally, the targets of popular antidepressant medications. When they are boosted, positive feelings increase.

It doesn’t even matter whether you find anything for which to be grateful. As Korb puts it, “It’s not finding gratitude that matters most; it’s remembering to look in the first place.”

As a job seeker, it’s easy to feel you have no control over what’s happening. That feeling can magnify your stress and anxiety.

Some people cope by consciously ignoring the situation, but for others, this only adds to their anxiety.

In either case, there’s one strategy that works. “Instead of ignoring things you can’t control, make a plan to deal with them,” Korb writes. “Making decisions includes creating intentions and setting goals — all three are part of the same neural circuitry.” And all three engage the brain in a positive way, reducing worry and anxiety, he notes.

Just don’t try to be an overachiever when it comes to decision-making. Striving to make the perfect decision, rather than just a good one, can be counterproductive. According to Korb, trying for the best decision results in too much emotional activity in a part of the brain called the ventromedial prefrontal cortex. “In contrast, recognizing that good enough is good enough activates more dorsolateral prefrontal areas, which helps you feel more in control,” he writes.

There is also a neurochemical payoff to making a decision: it increases pleasure by ramping up the release of dopamine.

But what about that great big hug?

In The Upward Spiral, Korb puts great store in long hugs, because they release oxytocin, a neurotransmitter and hormone 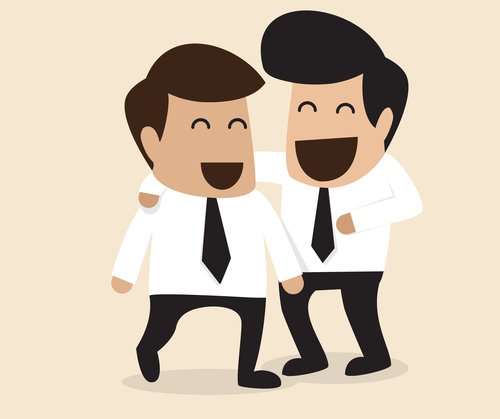 popularly referred to as “the love hormone.” It is thought to foster trust and attachment and to modulate anxiety.

Certainly you might value all of those benefits at a job interview . . . but you probably don’t need a career coach to tell you that this is one of the magical secrets of neuroscience that won’t come in very handy in your job search. Stick with the handshake, but be sure to use these tried and true practices to get yourself out of a cycle of worry and stress:

1.Acknowledge the state you’re in, because labeling your negative feelings can be helpful.

2.Make some mental room to consider the things you might be grateful for despite your current challenges.

3.Make a decision. For example, put the finishing touches on your resume and, even if it won’t be perfect, decide to send it out. You will have accomplished something practical, and, if your brain happens to be a human brain, you will have taken a step toward feeling better about the whole thing.